Powering up in an Efficient, Environmentally Friendly Manner 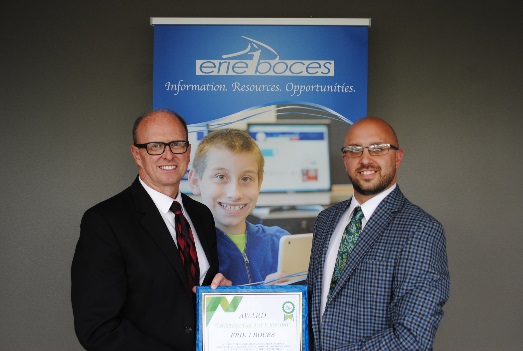 Over the past three years, Erie 1 BOCES has collaborated with Energy Enterprises to create thousands of dollars in energy cost reduction and a carbon emissions reduction equivalent to powering over a hundred homes in a year.

Energy Enterprises has provided a multitude of services to Erie 1 BOCES. Along with the Education Campus, each career and technical center under the Erie 1 BOCES’ umbrella saw extensive replacement in their lighting, moving from fluorescent and ballast bulbs to energy-efficient LED ones. Energy Enterprises also conducted an audit and determined which areas could maintain optimal lighting while reducing the number of lights used.

“Our organization investigates projects like the lighting upgrade constantly,” said James Fregelette, executive director, administration and operations. “By continually looking at ways to not only maintain but improve the physical environment of our buildings, we hope to make them places where our employees and our students want to come to work and school. This project was as much about improving the lighting of the workplace as it was energy efficiency.”

Overall, the partnership has been an outstanding success. Energy Enterprises says that 3,130,264 watts of power are saved daily and that costs have been reduced by $228,030 each year. In under three years, Erie 1 BOCES has reached a return on investment in the project.

“It was a privilege to work with Energy Enterprises on a lighting upgrade project,” said Fregelette. “They were extremely professional and committed to helping Erie 1 BOCES through the project. The project manager kept the project moving forward and was organized. They finished the project in a timely manner and delivered better than anticipated results.”

Not only has the Energy Enterprises partnership provided a cost containment for Erie 1 BOCES, but there has been a significant environmental impact as well. Since the partnership began, around 688 metric tons of carbon dioxide have been diverted. According to the Environmental Protection Agency, that amount of reduced carbon dioxide emissions is enough to power 103 homes for the span of a year. It’s also the equivalent of using over 77,000 gallons of gasoline. Reducing energy costs through light replacement is only part of the array of services that Energy Enterprises offers. They’ve also helped Erie 1 BOCES receive rebates from the electric company to reduce costs even further.

“The company filed all paperwork for rebates and kept on top of timelines and filing requirements,” said Fregelette. “We also had an issue with erroneous billing from the utility company and Energy Enterprises was able to work with the utility company, the public service commission and Erie 1 to find an amicable settlement. I would recommend having them represent anyone who has billing errors that might have been created by the utility company.” 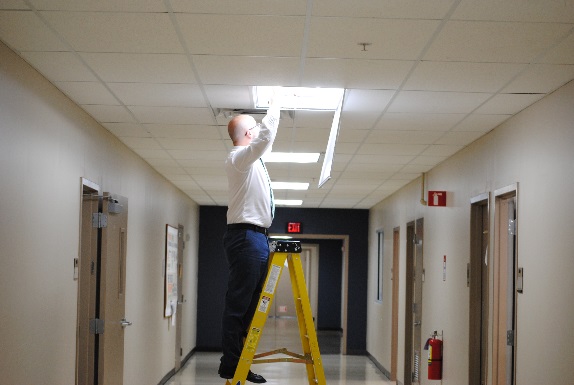 With proven cost savings and a positive influence on the environment, Erie 1 BOCES is just one of many organizations taking advantage. Cheektowaga-Sloan Union Free School District, an Erie 1 BOCES component school, recently decided that the opportunity is extremely advantageous for both parties. Their district is in the early stages of their very own lighting upgrade project, joining a growing list of now-22 districts, as well as companies and towns trusting Energy Enterprises with their energy reduction needs. If Erie 1 BOCES component schools are interested in a collaboration like this, then Amy Ceronie, an energy analyst for Energy Enterprises, recommends to simply pick up the phone.

“We have been working with school districts around the state since 1988,” Ceronie says. “Just pick up the phone. We will walk you through the process that ultimately will show you what options are available to you, as well as the costs, savings, rebates and payback period.”